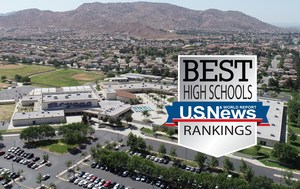 Canyon Springs, Valley View and Vista del Lago High Schools were recognized on Best High Schools list.
Vista del Lago High School received a silver medal and both Canyon Springs and Valley View High Schools received bronze medal recognition from U.S. News and World Report’s annual Best High Schools.
According to a news release from U.S. News and World Report, the designations started with a three-step process. To pass the first step, students at the school were performing better than statistically expected for students in the state. The second step determined if under-served student groups, such as African American and low income students, performed at or better than the state averages. The final step looked at the amount of ninth-graders who received diplomas four years later, which is noted as a different calculation than the state uses. Vista del Lago and Canyon Springs had a 91% graduation rate by the U.S. News and World Report calculation. Valley View’s rate was 94% based on the calculation.

Each of the schools were eligible to be judged nationally after the first three steps. The top 500 schools received gold medals. Vista del Lago’s ranking placed them in the top 2700 of all high schools in America. Bronze medal schools were not ranked, however Canyon Springs and Valley View both met the criteria for the award.

“Our schools being recognized for their high performance if something to celebrate,” said Superintendent Dr. Martinrex Kedziora, “We are providing the resources needed to ensure our students are successful.”

There were more than 20,000 schools reviewed nationwide, with only 29% of high schools being awarded a medal.

“We already know that we have some of the best schools in the state and these medals validate that success,” said Board President Susan Smith.